The resurgence of EDF's Tempo tarif

This subject has a previous discussion over at Tempo for Gite? but I thought it deserves more information.

This post is not here to explain the tarif itself as that is already available from the horse’s mouth.

The reason for this post is to give more background & to relay my recent experience in applying to EDF to change from my existing HC/HP tarif to Tempo.

As an electrician I have always been aware of the Tempo tarif but it has been in the doldrums for many years it was not possible to have it when opening a new contract. That has recently changed & now anyone with a 9kVA subscription (or higher) can ask for it & if you have a Linky meter the change is free & requires no physical intervention at your property.

Having looked at the current costs (yes, I know they will go up along with all the other tarifs) I discovered that the standing charge/abonnement is slightly cheaper than HC/HP. That’s win number 1!

Put another way…one is only exposed to a higher rate (the super costly red rate) for 22 periods of 16 hours per year. Everything else is a saving over any other “tarif réglementé”.

Anyway, I took the plunge just this morning & rang 3004 to speak to a conseiller. There was the usual long wait before getting through to a live person, part of that process being the need to enter my numéro de client via the 'phone keypad.

Once I got a real person to speak everything was very easy & straight forward. They went through the usual process of confirming the property & electrical item details that are already listed in my “espace client”.

After that they stated that I’d been sent emails about the change & that it would occur [edit] on 01/11/2022 at any time up until midnight!

Once I was off the 'phone I looked at the emails. One is just the modified contract & the other was a general one saying, effectively, thanks for my business.

I will update once the change has happened (or if it hasn’t…).

has been in the doldrums for many years it was not possible to have it when opening a new contract.

Yes you could but you had to insist and it was not advised if you had electric central heating or only electricity for cooking. What has disappeared is EJP which was the forerunner of tempo.

Not tempo but I cancelled the HP/HC contract recently as it does not give me any advantage with a heat pump but has a cheaper abonnement and it was also done automatically via the Linky, all I had to do was after 7am the following morning, hold the button in onthe Linky, count to ten slowly and release and it was registered. You might need to do the same with your button and hold it.

Yes you could but you had to insist

I obviously didn’t insist enough in the past…

What has disappeared is EJP which was the forerunner of tempo.

…all I had to do was after 7am the following morning, hold the button in onthe Linky, count to ten slowly and release and it was registered. You might need to do the same with your button and hold it.

The instructions to me state very clearly that the change is done remotely, with no need for any other intervention.

The same is true of a change to HC/HP, so I don’t know why they had you pushing buttons.

Probably to confirm the change either to the machine or to Engie that it was the correct meter they were changing details on. Whatever the reason, I did it and see on my account it was changed so all is well…so far until the catch up bill arrives in Jan, but it is my first time with them and with the pump so an experiment in costs at the moment. I did have to put the AC on again this past weekend as it was so hot so that will have racked up some costs

We have wet underfloor heating via air source pump. EDF have sent us the letter recommending Tempo, but my gut feeling is that it wouldn’t be a good idea. As an electrician, what do you think?

We have wet underfloor heating via air source pump

I’m not an electrician, but I used to have tempo and ditched it when I put in my heat pump, half of my house has the same heating as you and the other has radiators, I didn’t think tempo was worth it any more.

Thanks vero! “As an electrician…” was directed at Badger. But glad that your intuition was the same as mine.

Thanks vero! “As an electrician…” was directed at Badger.

You hit the grey reply button rather than the blue one, so your post was directed to me

EDF have sent us the letter recommending Tempo, but my gut feeling is that it wouldn’t be a good idea. As an electrician, what do you think?

To me Tempo is a no brainer. As my first post says, all Tempo rates apart from red day HP are cheaper than either “base tarif” or the HP part of HC/HP, & 4 of those rates are cheaper than any other “tarif réglementé”.

Clearly any load that you can avoid using during red or white periods will maximise your savings, but even if you have to use heating during a white day it’s still cheaper than the other options.

The big bonus for me is that we have two electric vehicles &, emergencies aside, can pick & choose when we charge them i.e. they will get charged on blue day HC (or when our solar PV gives us enough

Does anyone know where I can get hold of a list of the Tempo red and white days between 12/04/2021 and 12/4/2022 ?. Reason I ask is that I have detailed consumption figures in a spreadsheet for that date range and would like to simulate what I would have spent with Tempo vs HC/HP vs Standard tariffs during that period. As @Badger says, it seems like a no brainer, and I’m curious as to what I would have payed with that consumption, without even avoiding red days. Other periods of time up to the present would be OK.

Sundays & jours fériés are always BLUE. [Edited after stupid error on my part].

Saturdays cannot be red but can be white.

Hmmm… we’ve had the Tempo Invitation letter, but reading this thread I realize that it won’t work for us.

The way our home is organized we cannot be without electricity in the winter… yes, I can reduce useage but not go without…

I’m sure there are folk who can profit though…

Thanks @Badger , I do have consumption data from December 2019, so I should be able to use the data on that site.

So that’s a lot more than 22 red days per year ?. Another 52 plus how ever many holidays there are.

No, Sundays are always BLUE. You don’t get red days at weekends or on public holidays.

If you Google EDF Tempo you should find a button marked historique, it usually goes back about 5 years. In the interests of dispelling some of the misunderstandings, see below: 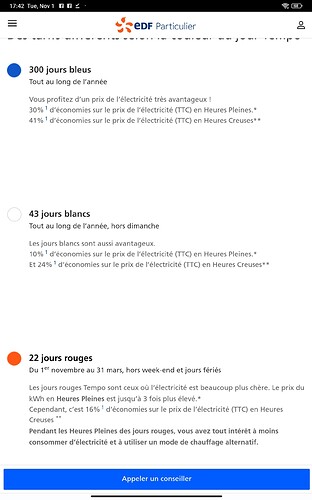 Argh I see it has changed or maybe I would have to go into Mon Espace client EDF and I can’t be bothered to. Here’s January 2 years ago. 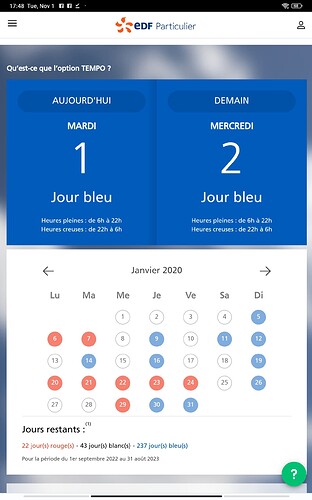 Is it not the other way around???

Finger trouble - I meant to say that they are always BLUE!

Is it not the other way around???

Oh bugger, I misunderstood. Mind you we heat with wood so can just not use dryer / washer / dishwasher on those days I guess?!