The resurgence of EDF's Tempo tarif

I think you misunderstand how it works. It’s a stand alone unit - it’s not suitable to be grid tied. The specs vague but it was discussed on French solar sites - it’s not phase synced so …

Not sure I understand what you mean, as you can use the powerbank to charge via solar meanwhile using it to run whatever’s plugged in.

@captainendeavour I think my induction hob rings are 1kw+ so the small unit I’m buying wont run that unfortunately. Is my understanding right that your camper induction hob is 200W as that sounds very low??? The reason I’m asking is because a friend of mine was going to look at induction hobbs for his camper.

I’m looking at this company as they seem to have a large selection of panels at good prices/watt.

Or Spain. Cheap and no duty etc

I assumed you meant to use it to backfeed the house - the way most solar installations work. I’ve seen the same discussion elsewhere this week - because it’s on offer - most people wanted to use it with existing solar. I kind of assumed as you mentioned lighting you intended to feed the house from it - but lights can be plug in so…

It works as a stand alone unit. Sun charges you plug stuff into it - be it a caravan or extension lead or USB chargers. So it can only power stuff plugged into it - which only works if it’s all in one place.

You can charge from mains that’s not the issue

What you can’t do is plug it into the house mains to back feed/reduce “EDF” consumption ,- it’s not a plug and play unit as I understood it.

There are small - I think up to 600W packs - that plug into a mains socket - or more complicated kits you wire via the tableau.

There’s some fundamental differences between off grid installations and grid tied installations. That battery is normally sold for off grid. 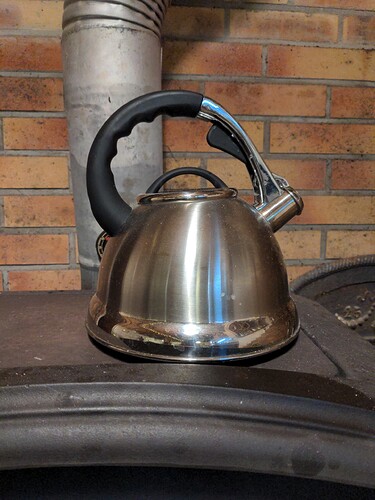 This is what we use for washing up and Mrs W hot water bottle. 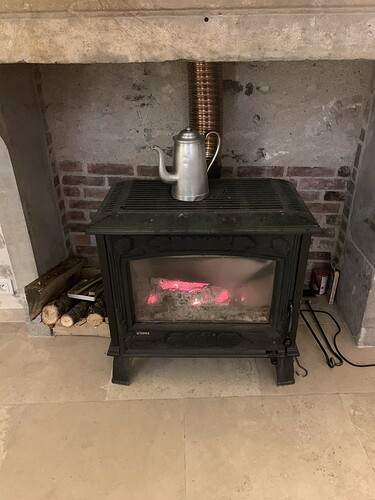 I wish we could have a kettle on ours as it would be handy, but the top half up to the roof is taken up with all the gubbins for the hot air system for the rest of the rooms in the cottage.
We will be putting another smaller wood burner in the loft extension. 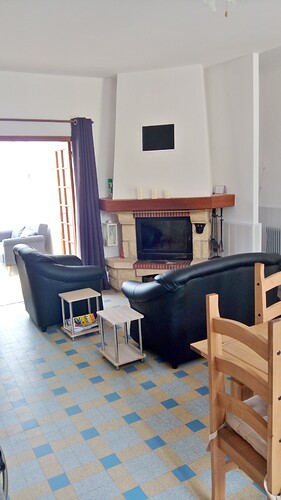 @chrisell ok that now makes sense. Yes it would be good to connect directly to the house, but the unit I’m getting is far too small for that anyway. It’ll be located in a sitting room area near the bits of kit I want to use regularly when in the house - I think it’s amazing how many of the regular items are all so relatively close. And if I want to use it another room I simply relocate it - just need to figure out wiring for solar so there’s a connection point where I may want to use it during the daylight hours.

Oh dear oh dear, guess who left a bar of the heater on in the showerroom Wednesday at around 6pm until dh found it Thursday at 3pm. Be VERY careful

@toryroo ouch! But in the general scheme of things it could have been alot worse, and at least it’s a reminder to check you turn off when not using stuff. Sounds like something like this may be an idea???

Yes, good thinking, just showed dh and he said he’d been looking for one today. We’ll try to find not on Amazon but thanks if we can’t ,…

I’d like one of those that works for gas before my forgetful mother burns the house down.

I’m quite surprised tomorrow (Monday 30th) is a red day, when the daytime forecast for the Paris area is not particularly cold (10C). I understand RTE, the national grid provider, extrapolates its weather data from the Paris area. Does anybody have any insights as to what the specific weather features are that prompt red days (ie how cold does it have to be to trigger reds)?

On the positive side, they are seriously running down the quota of remaining reds, having had 10 in a row (weekdays obviously) incl tomorrow, Monday. Maybe they are briefed that there is not going to be another cold snap, so use up those reds?!

I understand RTE, the national grid provider, extrapolates its weather data from the Paris area.

If that’s true (do you have a source?) it doesn’t seem very logical. As RTE need to balance the whole grid using data from one place doesn’t seem like a very sensible way to do it.

Maybe they are briefed that there is not going to be another cold snap, so use up those reds?!

I’m sure you’re right - they will use all the reds up, regardless…

It is just whether (nationally) do they anticipate a peak of electricity use or do they have a dip in production.
It is possible to have 3 weeks of 5 red days on the trot, Saturday white, it is just the way the cookie crumbles. The easiest thing if you have signed up for tempo is to accept its vagaries and think of your 300 blue days, at least that’s what I did.

Maybe they are briefed that there is not going to be another cold snap, so use up those reds?!

Yes that was my thought too.

I must say it was very nice to have an oven cooked meal yesterday. We don’t use it at all on red days. Another unexpected benefit is what we are eating. We used to eat a lot of stir fries, especially in Oz where there are so many great sauces available. For some reason we’d got out of the habit but the last 2 weeks we’ve rediscovered them, yum! I think I’d become lazy just popping some potatoes or whatever in the oven!

Must say, seeing another red day tomorrow didn’t phase me as seem to have adapted quite easily, with doing any washing off peak, bulk prepping any meals off peak and having the well pump on a timer for off peak only. Also recharging batteries off peak to use during the peak period, and managing to use any other high energy consumers in off peak. The only appliance I haven’t now measured for energy consumption is my fridge as it’s built in and not possible to access the plug without removing it, so turned it off briefly this morning so I can see what the difference is on tmrws linky tracker.

Also, based on the fact that I’ll soon be receiving my Bluetti battery, I was looking at low wattage kettles, again so I can also use whilst on trips. Seem to have found something interesting running at 300W, with 350ml capacity.

. The easiest thing if you have signed up for tempo is to accept it’s vagaries and think of your 300 blue days, at least that’s what I did.

Absolutely agree. I looked back over the last years consumption and my highest days (similar to red days) were over the summer when we sleep with the aircon when needed. So yes the red days now which are totally manageable but blue days when our use is highest. Win win for me

Oh and for those thinking of it, apparently you can only sign up during 22/23 then the campaign will stop and you will not be able to.