This one is a bit closer to home

…my own dear foster, Harper Grace. She went out for her usual pee and a last walk round in the garden at 10 last night, and never came back. I got to bed at 2 after a fruitless search, and have spent much of today doing the same. It is very strange, on the rare occasions that she has gone out of the garden she is never far away and, with her excellent hearing, can hear my whistle over at least 300 metres, so I know she isn’t close.

That leaves theft or accident, and I don’t believe anyone would want to steal an 8 year old blind, sterilised, Beauceronne so my dread is accident. In addition to searching fields and forests on foot, I have been kerb crawling all the roads and lanes in the commune and accosting total strangers. Good job we are not in England. 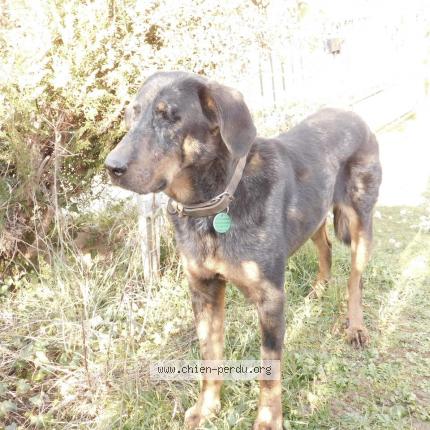 That’s a pity. I hope she turns up David.

David, I really hope that Harper Grace will soon be found

Oh I’m so sorry to hear that, I hope you find her xx

Thanks for the kind thoughts, we keep wondering where the hell she could be, if not round here.

I have always been critical of Facebook and, although I do have a page now, it is very quiet just for family and close friends. But it is amazing, Borghild, who is the founder of the small association to which she belongs, put all her details on her official page (Jane Marple, she’s a big fan) and it has gone mad and obviously shared all over the place. My neighbour, Marie-Paule, rang to say that she had picked up on it and even went straight out and toured the district in her car.

I have also met some very nice people while driving round who have taken all details and got me to email pictures. No result so far though.

Hope you find her soon and take care.

Oh no I am so sorry. I hope you find her very soon.

Sorry to hear about your missing dog. I hope you are reunited soon

No news still, and I’m going to take this bluetooth thing out of my ear now to monitor the mobile and get myself off to bed. Tomorrow its posters for all the likely places.

Feel so helpless, a kind lady phoned this evening and offered to come and help me search, but I had to put her off and thank her nevertheless. I know that Harper isn’t within whistle range and I have searched all that anyway. No point in keep on driving round at a snail’s pace over the same old ground.

Oh David, it must be soooo upsetting having her gone a second night. Thinking of you and really hope she turns up safely xxxxxxxx

Horrible uncertainty - I hope you find her, bon courage.

It really is Vero, and in the hour or so this morning before properly waking I began to think that there was a very good reason why she isn’t responding to my whistle in the 300 metres or so circle around here.

Not that she has left the area, but that she might be lying dead after a collision with a tree or something. I will have to start scouring the forest where she never goes, unlikely but I can’t shake this off now, but first I have to print and distribute the posters. I will experiment with the enlarged chien-perdu one but with my number in heavy marker pen across the top, it appears only in a link on the original.

I let Jules out into the garden this morning as soon as I was up, the previous night the door was left open all night in case Harper returned, but there was a difference. Instead of his ear splitting howling with excitement and waiting, bouncing, behind Harper, this morning he waited silent and patient before going out though the opened door.

But then, a few minutes of panic, I couldn’t see him anywhere in the garden, and we have large windows on 4 sides, and so I went out and called him by name. This then changed into a brief moment of relief, and hope, because I spotted him on his hind legs at the forest gate howling towards the trees. Had he spotted Harper? No, the flash of white moving in the undergrowth was a cat, not a large, black, dog.

You will have probably already tried this but taking Jules out on a long lead saying “Find Harper”, would that work mayb, incase they can pick up a scent.

You will have probably already tried this but taking Jules out on a long lead saying “Find Harper”, would that work mayb, incase they can pick up a scent.

I took him into the forest which is accessible (many trees means less bramble undergrowth) and into which she sometimes wandered, but on a short lead, a long one would get us hopelessly tangled round the trees.

But, with reference to my post above, I will take him later to a forest where she never entered (didn’t like the brambles on the periphery) holding from time to time a piece of fabric associated to her to his nose while intoning her name. Like her he has good scenting skills but unlike her, good eyesight too. So worth a try.

He is well aware of her scent though, since she went he has slept on the dog settee where she usually slept alone, normally retiring to his own bed (occasionally used by her) or Fran’s.

Could you also ask someone else to help you do a search of your immediate surroundings? Sometimes one just doesn’t see things, and if she is lying down an injured a dark dog on a dark background can become “invisible”

So sorry to hear this David. I really hope you find Harper Grace. Our neighbour lost his bulldog a few years ago and put notices up all over the place to ask people to keep an eye open. She was found after almost two weeks.

Thanks to both. Facebook has been organised in a big way by Borghild, Harper’s owner, and there is a big walk in the woods arranged for this afternoon by Sharon, of the pension where all the Dobies in waiting are kept.

Our Dutch neighbour up the lane has already been out twice with his tracker dog which has been used in the past to find lost children and I have been busy making posters and distributing them. I will be off to the vets with one this afternoon after I hear back from Sharon.

Even the chasse has been informed. If she is still in the area, we have a good chance of finding her, but I don’t personally believe she is, or that if we find her, it will be alive. Alive and conscious, she would have not ignored my whistle, not only here but in 2 communes.

Any volunteers with a drone have been asked for too, but I think it will be little use in thick woodland.

More news when I have it.

Grim. If it is any consolation, my ancient lovely Nanna (lab/pointer cross) disappeared for 3 days and came back under her own steam but a bit lopsided, she’d had a stroke, we went through every scrap of woodland etc around us without finding her, she was 12 and a half then and lived another 4 years.

So sorry to hear about your dog!! Please don’t loose hope, ours has a habit of going off and was gone for over two weeks then appeared again one evening, still with his lead attached.

Is she chipped? If so it might be worth contacting the local vets just in case someone brings her there. Though you may well have already done that.

The very best of luck in finding her soon!