Hi all and Bonne Année. We need to start decorating but have a problem with a cable that we do not use protruding through the wall. I think it was originally to connect a satellite dish (which is still on the side of our house) to a TV mounted on the wall near it. Our Tv is connected via WiFi so we have no use for a satellite dish. My question is, can we just cut this cable and fill in the hole? I have attached photos of the offending cable 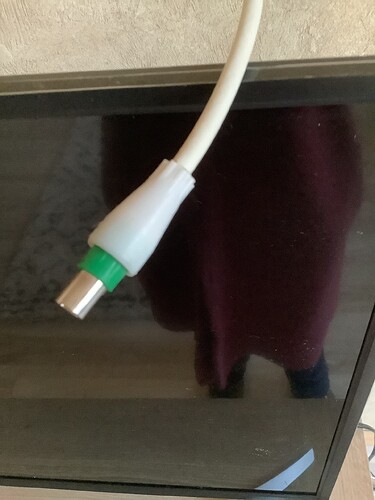 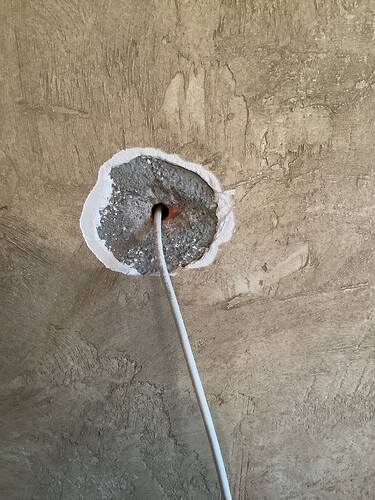 Hi
Yes you can.

quick question: what is the other end connected to (if anything)

If that’s an outside wall, chances are it just goes straight up to the dish.
An alternative would be to take off the plug and fit a wall arial/dish socket, thus retaining the option of satellite TV. But might be in the wrong place now.

No idea Graham. It’s just protruding out of the wall and screws very close to it seem to indicate a wall-mounted TV?

It’s an inside wall Geoff.

Just lop it - it has no power component. It’s an old aerial cable based on the plug rather than satellite so you can cut without worry

My vote would go for putting a proper socket in place which will look neat if unused but retaining the option of using it - assuming that there is a functioning satellite dish or aerial on the other end, but would concur that it will be OK to cut the cable off and fill in the hole.

I’m assuming that you did not do the original installation, so won’t mind if I observe that whoever did was a lazy fecker not to have put a socket there in the first place…

By the way - if it runs through to an outside wall, did the installer at least think to having it sloping up from outside to inside, if not there is a risk of rainwater getting in. I ask because, as we can see, the quality of the job is not high.

I was really asking about the other end of the cable…

Not certain but I’m assuming it leads to a satellite dish outside.

I’m assuming that you did not do the original installation, If he did why did he ask the question

Thanks for replying. The ‘installation’, as you rightly pointed out, is a mess and was like that when we moved in. I’m thinking that the rest of the cable goes up into the attic and out to the satellite dish because there is no sign of it on the other side of the wall (in the hallway).

I’m assuming that you did not do the original installation, If he did why did he ask the question

I was merely being polite.

That’s a TV connector, not a Sat one, so I’m guessing there was a TV antenna somewhere at one point.

Beaten to it by @NotALot

There is a rooftop aerial.

There is a rooftop aerial.