I was saddened by the outbreak of war and horrendous misinformation regarding the AZ vaccine.

before I retired I was a contract manager for a major company, i wrote and negotiated contacts up to £350m, not minor league.

For such senior people to claim that ‘Best Endevours’ or Best Reasonable Endevours’ was anything but, we will do our best is frankly ludicrous. Even the Belgian Governments Lawyers said it was rather unlikely they would win the argument.

Then to claim that the AZ vaccine was paid for by the EU? Pardon, simply untrue. It was a UK sponsored vaccine. The initial contract and press release in April is clear, Not for profit (please note EU Commission) first to be supplied to the UK, for distribution and production around the world to assist the world in defeating COVID. Please go and check, it was a suprise to me from a Tory Government.

As I understand it the only money changing hands was to increase production facilities at the AZ Belgian plant. The Commission should look at its self to see why that is late. Hmmmm, is there some red tape and some inspection and assurance issues here? Oh I think so. Then the EU ordered 3 months late, oh is there another red tape issue? Then the EU takes longer to approve, no idea why, could it be red tape? The UK had authorised parallel approval, its approved as a rolling process, not wait for it to complete then look at it. Thats how my Research Scientist friend saw it. So could it be, rather a hash on the part of the EU. I think it fair to say it was. For me, the EU demanding that they pay less for the AZ vaccine that the UK when its a not for profit product left me stunned, the final straw.

The sad fact is that the UK made a hash of the initial stages of the pandemic but is doing rather better than most at getting out of it via vaccinations. To then be attacked by the EU is very disapointing to say the least. Especially when considering the fact that the EU may very well rely on UK produced vaccines to get its self out of its self made hole. I imagine some of the commentators on here would have said if it was the other way round the EU would have said ‘well you voted for it’ a rather a lame argument normally.

So the EU decides, well we will threaten the UK, we will ban exports of Pfizer vaccine and close the Irish border!!!

So lets look at that:

For goodness sake, when will the EU commission and the nice Mr Macron learn, no one wins such conflicts. A reasonable approach would almost certainly have produced a far better result. The UK will be awash with vaccine and soon. Lets hope that they act reasonably and let the EU have it, or will it be sent to Africa?

After Fishing, power, and now this it has made me realise I dont really want to be a resident and will not be pursueing the application. It also means that I can get the vaccine in 2 weeks time, I am 60, so reverting to UK main and France second home is now certain. Rather a shame but my confidence in the EU and Macron has been shattered, saying that my regard for the French people remains high, not so the leadership.

In the UK my neigbour says the Dentist’s staff are doing them, as is the Army, all types of qualified staff and now Pharmacies!! Its topping 500,000 a day, that isnt showing off, I think the people of the EU should be asking why not here instead of trying the place blame elsewhere.

Call it Bulldog spirit or Nationalism, whatever, it works, I would have thought most of Europe would so the same.

I personally would not be jumping ship right now - the EU had a ridiculous blip on Friday for our couple of hours which thankfully hurt no-one - and the flip side is the UK mishandling of the epidemic from the start.

I wouldn’t form a life changing decision on one mad EU afternoon - keep an eye on the whole picture.

Please explain why this is M. Macron’s fault?
The EU is 27 nations and at least the EU have changed tactic rather than just dig a bigger hole (as is the case in the UK when they become intransigently entrenched).

After Fishing, power, and now this it has made me realise I dont really want to be a resident and will not be pursueing the application.

What application are you referring to?

Bye bye enjoy living in the influence of Doris Johnson,

The current situation is a bit of a mess and, yes, the EU behaved unreasonably - but quickly withdrew from the extreme position as wiser heads prevailed.

Does this shatter my faith in the EU - no, any institution can be bone headed on occasion; the important thing is whether a mistake is recognised and rectified, which appears to be the case this time.

It does, however, show that the EU is capable of flexing its muscles and there is NO reason it has to be nice to the UK - where necessary it will look after its own interests. I’m afraid that is the reality brought to us by Brexit.

I don’t think a lot of Leave voters took that into account (nor some Remain voters, no doubt), indeed the expectation seems to have been, all along, that there was some special “ex member” status which we would be accorded ('cos we’re British dont’cha know). Sadly not, as we are now discovering.

If the application has already been made, I wonder what mechanism there is to retract it

If the OP was not resident in France before 31st December 2020, it’s academic anyway. Still, I’m sure he will continue to enjoy his holiday home in that dreadful, nasty place called France.

What a load of drivel

The EU had a bad afternoon that is all - but apparently perfectly acceptable to threaten the use of Article 16. 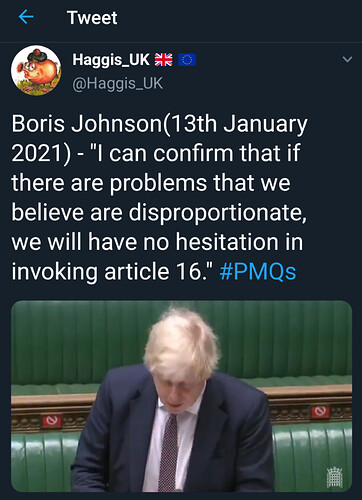 It wasn’t just the initial stages of the pandemic that were handled badly in the UK. The UK economy is the worst affected of the G7 nations and another 1287 Covid deaths were recorded this last Thursday so for everyone in the UK I am glad that the UK is now doing so well in its vaccine drive. Also glad the EU rapidly withdrew from its mistake this week.

But this whole us and them mentality is not the way we are going to get over this pandemic in a connected world.

Invoking the ‘bulldog spirit’ has that Brexiteer world WWII nostalgic ring to it. A war which, let us not forget, Britain didn’t win singlehandedly.

An old boss of mine - a retired UK Army Major - once told me that the man who never made a mistake never made anything.
That has been a guiding influence in my life since my 20’s when he told me that little gem. We all make mistakes, it’s how we deal with the aftermath that maketh the man.

We all make mistakes, it’s how we deal with the aftermath that maketh the man.

And how we learn from them (or not…)

@PhilCalais
Well said Philip. Despite being able to organise their Armani suits and flashy cars, it would seem that a piss up in a brewery is beyond the competence of the EU Commission.

What are you on about Roger? You do realise how silly that comment is? You haven’t been at the cooking sherry again have you

If you’re going to directly accuse someone of drinking at least get their name right.

Sorry about that Roger, I’m off now to read the contract.

Eu makes one mistake and must be written off.
UK makes countless mistakes for four years (not including under funding health much longer), shoots itself in the foot with Brexit, mismanages Covid and gets one thing right - vaccines.
Where do I want to live now - EU. Can’t wait

Were you a headmaster in your former life