I’ve just seen it on the news. I didn’t realise it was as bad as it was. Frightening and, for those effected, distressing. Makes me fearful as there are still warnings in force for tonight. 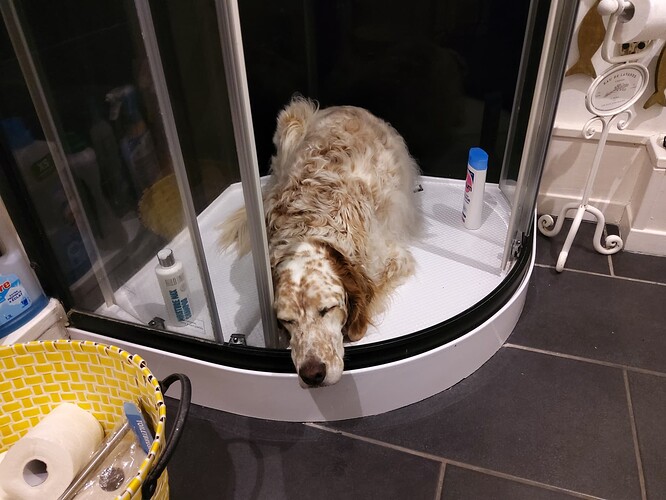 That is so tough! We had an Airedale who was terrified of thunderstorms. We used to sit with her in the utility room with the washing machine and the tumble dryer going to try and blot out the noise - that and fireworks.

A Lemon Setter, lovely. My late Blue Belton was not bothered by storms but I had a Breton Spaniel once who would climb the walls (literally, he would go to a corner of the room and try desperately to climb) at the lightning, though not the thunder, he was deaf. We had to join him in the living room with all doors and shutters closed and the lights on to prevent him seeing the flashes leaking through the shutter gaps. A later dog, a Greyhound/Saluki Lurcher, didn’t mind the lightning but hated the thunder. The tactic there was to turn up the radio/tv as loud as possible.

Our current Beaucie/Dobie X Jules does not seem bothered but he has started to join me on the bed during the night recently.

Temperature currently 17°. A few days ago it was 38°.
Even with sweater and long-sleeved T-shirt I am cold. I have put the radiator on in my study!
I think I have been in SW France too long and my blood has thinned.

just back from a rather hot 3hr hike - registered 32 and currently 27 degrees here in 34, but nice in the shade