We're all Trussed up now :(

Thank heavens we now have Liz at the helm - finally an intelligent capable truthful person in charge.

Fascinated to discover what wonderfully insulting nicknames will be bandied about on the Forum to describe Liz Truss, It’s probably going to be a bit more difficult than bashing Bojo the Clown, (he really was a gift to the pernicious pundits) without appearing to be a misogynist. Apparently she likes “The Truss” other suggestions are the “Iron Weathercock” , the “Human Hand Grenade” but my favourite is this, coined by an old favourite of Johnson, Dominic Cummings, “Truly Useless”

She has been referred to as Thick Lizzy

I actually think Truss has inherited a poisoned chalice. For years, all of Johnson’s premiership and I suspect way before that, the Tories have talked big and pranced around but done very little below the surface. The UK does not have adequate gas storage, it does not have a solid energy plan, it has shoddily built housing stock, the NHS has been run into the ground, the legal system has been undermined, the police forces have been slammed and blamed and told to get their house in order but not given the necessary support, the education system has been twisted this way and that, business have been told to sort out their own problems. Successive governments have stuck a few sticking plasters on here and there and announced massive support packages funded by taxpayer money that if they actually get off the ground, simply result in the money being funnelled into the pockets of consultancy firms. There seems to be no follow up on these schemes, no mechanism for measuring success and no accountability. So the foundations for all these aspects of the UK have been rotting all this time. I is going to reach the point where the current infrastructure will not be able to hold out for the time it takes to devise and implement a solid solution. Even if the will was there.

Fascinated to discover what wonderfully insulting nicknames will be bandied about on the Forum to describe Liz Truss,

I didn’t see it - but have just seen this… 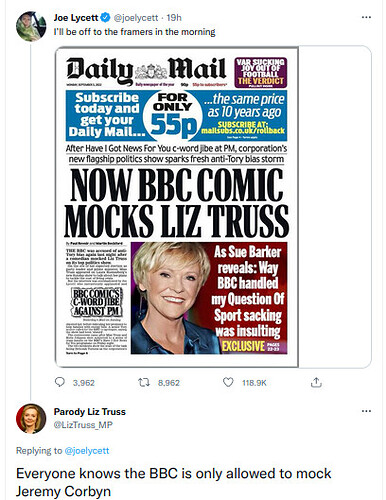 Is this what you mean by ‘cancel culture’ @Porridge ?

“Diana passed the test with aplomb”

The donors financing the Tory party won’t allow an election before 2024.
That’s the reality.

I actually think Truss has inherited a poisoned chalice.

I didn’t see it - but have just seen this…

Is this what you mean by ‘cancel culture’ @Porridge ?

I believe Sue Barker is a taste you share with Sir Cliff Richard, Geof.

Plus - she put some of the poison in the chalice herself !

To be replaced by Braverman.

You might end up wishing Patel was still in the job!

Does this mean Rwanda is now off the list ?

It is being challenged in court at the moment.

Britain also grants asylum status to many Rwandan refugees – at least seven so far this year. So, while the government has signed a deal with Rwanda for the mass deportation of unauthorised migrants, insisting that it is a “safe and prosperous” nation, it acknowledges at the same time that the country is unsafe enough for people to be forced to flee and be granted asylum.

Needless to say - it is actually the still-often-fair British court system that grants asylum to Rwandans - not Tory ministers. 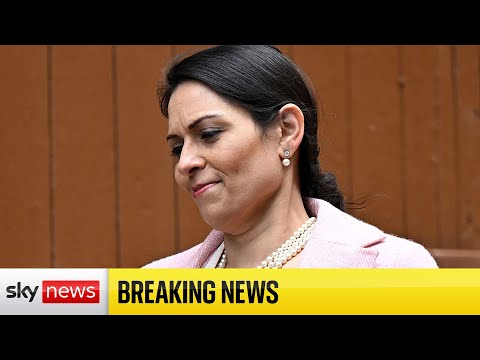