Yes or No - Carte de Sejour website in English

please feel free to type ‘look harder next time’ but…
is there any possibility, do we know, that the french gov will update the CdeS website to include a ‘deal’ scenario? so you can actually apply online or should i just…
a. wait
b. go to the prefecture
i don’t care any which way but my Irish husband is hassling me to sort it…

(a. is my preferred option, but b. is also good since the prefecture is over an hour away which means a day off work plus there’s a lovely, lovely brasserie there…)

Which prefecture? From what I’ve read few if any seem to be dealing with the UK applicants directly. I’d guess that now the deadline for all UK citizens having the appropriate TdS is almost two years away they are waiting until the reality of Brexit becomes clear.

I guess Teresa means the ministry of the interior’s website, not individual préfectures.
I doubt anything will be done until 31st January. France must be royally sick of setting things up in advance “just in case” and then everything changes and it was a waste of time.
Tell your hubbie that France has set its own generous timescale and that’s the one that will be implemented, and hassling you won’t do any good. They won’t start issuing the new permits until Brits are officially no longer EU citizens, and they won’t put any pressure on anyone else or themselves to do it in a rushrushrush.
"Les ressortissants britanniques présents en France avant le 31 décembre 2020 devront [note the future tense!] demander le nouveau titre prévu par l’accord de retrait. Ils pourront [note the future tense!] en faire la demande avant la fin du mois de juillet 2021, selon des modalités qui seront précisées ultérieurement.

b. go to the prefecture

Particularly if your husband is Irish then why on earth are you fretting? And what are you worrying about anyway? If you are living here legally (ie paying taxes and so on) then just wait.

The French have got far bigger things to worry about right now than sorting out the paperwork of a few thousand Brits. So I wouldn’t expect anything in place till the end of this year.

Be at ease. Stop worrying. All will be well.
Give it plenty of time to shake down. Give the local officials a break. At the right time get bunch of shamrock and present it to your local Préfecture without a request for information rising to your lips.

You could try saying

(Hubby will translate and supply pronunciation!

thank you all… I should say quite loudly that I’m neither worrying or fretting. I’m actually as they say ‘not bothered’. It’s my belief that at some point in the future the French government will issue guidance, clear rules and some snazzy new website, I’ll gather a mountain of paperwork and pay an astronomical fee for a card of some sort.
Hey Ho !

As I understand it there will be no astronomical fee. If there is a deal the fee will be equal to what French citizens pay for an ID card and they are free. If there is a no deal the fee will be what those citizens pay for a passport, €139(?).
From what I’ve heard the online ‘no deal’ portal required less paperwork than when applying through a prefecture and a similar system if and when there is a deal might even require less than that.

Where was that from? I would have thought it most likely that we would fall into the same category of other third country immigrants, so a permanent (ie 10 years renewable) card would be 269€. Why would we be treated like French citizens rather than what we will be - non-UE?

Which is all still a heck of a lot cheaper that what EU citizens will have to pay to stay in UK.

My wife and I applied for our CdS in February 2019.

We have just received an invitation to attend a meeting with the Charente Prefecture in Angouleme in 2 weeks time.

A few of our friends have also recently received similar invitations.

I’m fairly sure it came from RIFT or its spin off website. The cards will be a lot less than the €269 that others pay. It’s got nothing to do with being treated like French citizens, it’s just the formula that will be used to determine the cost of the cards.

In CdS application terms February 2019 was a long time ago. Would Angoulême accept an application for a CdS EU/EAA/Suisse today?

My guess - and it is only that - is that now Brexit is a reality, Angouleme have started to work their way through the backlog of applications.
Makes sense given the large number of Brits in Aquitaine.

Which is all still a heck of a lot cheaper that what EU citizens will have to pay to stay in UK.

I didn’t think there was any charge for applying for settled status in the UK?

But does going to the expense of issuing you with a card that will need to be replaced in the very near really make sense? Perhaps the nearby Deux Sèvres prefecture who have decided to wait until the future is clear to see is the sensible one. My point was there is a big difference between a prefecture processing paperwork for a CdS EU submitted a year or so ago and accepting applications for the same card just a couple of weeks before the Brexit date.

I didn’t think there was any charge for applying for settled status in the UK?

Sorry, missed out the all important ‘non’ as in cost for 3rd country entrants to UK is £800 as opposed to entry to France at 269€. And we will be 3rd country.

Yes but those EU citizens who are already in the UK before the end of transition and apply for settled status, won’t be treated as 3rd country entrants. They won’t have to meet the immigration criteria nor pay the fee.
Just like those Brits who are already in France before the end of transition and obtain their CdS on that basis, won’t be treated the same as Brits who will apply for visas and go through immigration procedures as third country citizens after the end of transition.
That’s what’s been agreed in the WA. After the fuss there has been over citizens’ rights and all the work the EU has done and still is doing to ensure we get decent treatment, let’s be grateful to them because it will make a huge difference.

Hugely grateful to EU, they have done more for us than the Uk has! 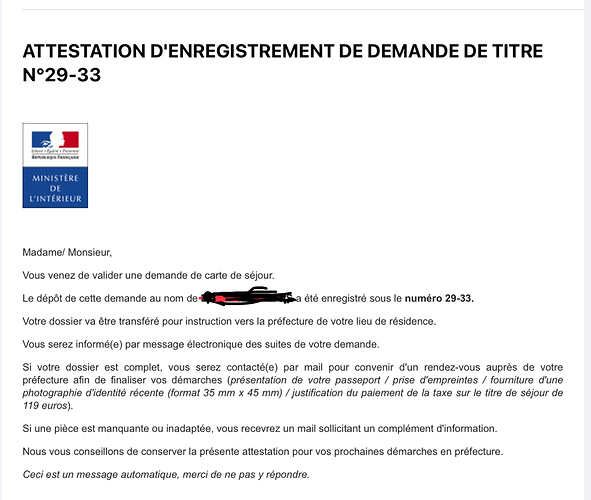 I apologise, the fee for a CdS if there is a no deal Brexit is not €139 as I suggested. I have been sent a copy of the email received by a friend after he applied online late last year. It quite clearly states that the fee if there is a no-deal, the terms of this application, is €119.
As I have stated before with a deal there will be no fee.
The fee of €269 will not apply to a U.K. citizens resident in Europe before Brexit.