How to get rid of dormice/loir

Very good summary. I have tried everything listed and am amazed to find that one particular sonic device seems to work. I put it in place in June and have not heard a noise since. I hear them complaining outside at night that they can’t get back to their favourite warm nests in my roof.
The successful device was from Amazon (sorry, I didn’t buy it but was given it by someone who doesn’t go shopping) and it seems to use various frequencies going from 15kHz to 45 kHz changing every five seconds. If someone is interested I can find out the model number.

We know they work (UK and France)… tried and tested, but can’t remember what they are called or model etc…

If someone is interested I can find out the model number.

“takeinspire” is the name - Ultrasonic pest repeller
X0017QNMO5
Made in China and sold in boxes of 2 from Amazon. I was given one and haven’t heard a peep since. I tried the same type of thing for the moles in the garden - with zero success and another brand for the loire, also useless. This does the job and apparently gets rid of other mosquitos etc.

Hi,
Lying here googling them again after being woken up for the third time tonight …

Neigbour’s still refusing to help get rid of them and it’s stopping me from sleeping. I can’t access the roof space.
So I’m going to buy a device and put it on an extension lead through my window and strap a ladder to the gutter before the next dump of snow….Would you be able to find out what the device is that you found successful please?
Sleep deprived woman at 3 am …… 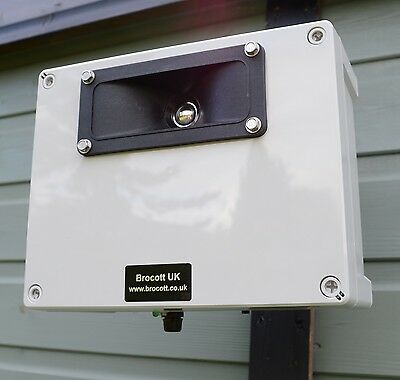 . Bird repelling may be less effective if your neighbour is deploying bird feeders. The devices produce a very strong, pulsating and aggressive ultrasonic sound that is not audible to humans when set on higher frequencies.

There is also a great unit made in Spain but I have lost the information on that one.

We had this problem last year - in a townhouse near Paris…what we would call ‘terraced houses’ with long collective roof space which provided a passage for mice to get between all the houses and into the walls.

A group of neighbours worked together to figure out where the wretched creatures were getting in and the hole was sealed…this is a very important first step otherwise you’ll never solve the problem. It’s also a good idea to keep a tidy house and keep all food sealed and in cupboards…no crumbs!

Then we called in a pest control company who sent a bloke to put down poison in the roof space once a week for about a month. Problem solved.

We have cats but they’re not much use against the rodents when they are in the wall cavities!

It’s an annoying problem, but relatively simple to deal with. I know someone who had bed bugs and that is a living hell, to be avoided at all costs.

Buy earplugs. Loirs are nice little creatures and why should you murder them.

I use humane traps to catch a variety of rodent squatters. I have found that peanut butter or Nutella are by far the most successful bait.

N.B. they don’t seem to be able to distinguish between ‘proper’ Nutella and supermarket own brand so they get the cheap stuff!

Ear plugs are the cheapest, quickest method.
t-raputa, muli-frequences, 25 or 30 euros a pair on amazon france.

any search for ‘ulrason souris rats’ or such will do.
Best of luck.

12 gage shotgun, OK its not humaine and you may need to replaster your walls afterwards, but it’s loads of fun and what with Covid, if you need cheering up a 12 gage shotgun is the way forward for mice, rats, and squirrels,

I think I have a pjne marten in the roofspace - during the day, no noise, very late at night sounds like a dinosaur up there, and removed part of the ceiling and what a mess! I did purchase a massive humane trap at the local hunting store - I don’t think I could fit in, but it’s big. I set it up one night near where I thought the marten was moving. In the morning, saw something in the trap from the kitchen - very excitedly went to the trap, only to discover it was a cat that had gorged on the complete tin of sardines. I then put the trap actually on the roof, then same again, the cat got up there and trapped again! Think I’ve blocked up all the openings now and don’t hear anything, but now think a mouse or rat in up there in the roofspace as something alot lighter moving around, and probably eating the limited insulation I have. I have one of those sonic repellers, but think I need to go a stage further now, as it’s not leaving!

Sonic repellers sound waves get blocked by objects and absorbed by insulation.

I think I have a pjne marten in the roofspace -

More likely to be a stone marten (fouine) than a pine marten (martre).

any ideas how to keep them away?

Block up the entrance points. 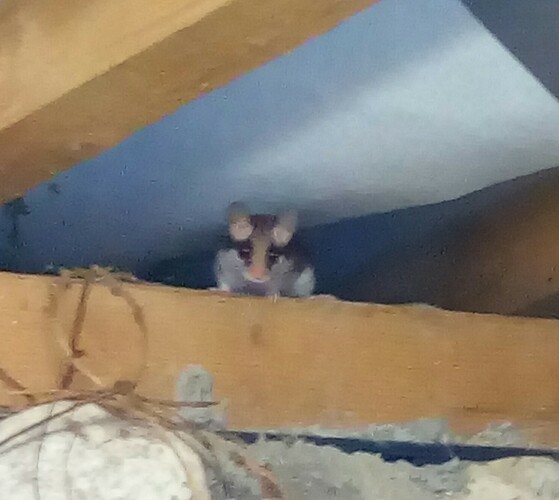 They are seriously cute to look at, unfortunately, but they do a great deal of damage in a loft. We had one and found eventually that he had got in under the eaves. We found a couple of spots where an agile fouine could get to the eaves (they can’t climb up vertical walls but are adept at finding jumping off places) we blocked the eaves with chicken wire and no further problem.

We had thought that having wall arches along the back wall of the house was a lovely idea for scented climbers, not realising that we had created the perfect ladder for fouines

Yes, need to have another check around the outside, just to double check that no entry points. Re the wont go up walls, are you sure, as I’m sure that’s how they got into one opening which was a disused ventilation hole in the middle of a wall.

Thinking about it, aren’t they nocturnal i.e. if I sealed openings during the day, wouldn’t I trap them inside??? Just a thought!

You’ll have to do the night shift