Just because we love them

Hi everyone, I thought I’d do a post simply for fun, in these troubled times, for all of us who have four legged children that we’d like to talk about or don’t have but would like to get.
I am a failed fosterer, don’t want another dog, got one anyway and don’t get me started on the cats person!
Let’s keep it light and fun. Exchanges and advice are always helpful but everyone has their ‘libre arbitre’.
I’ll kick things off with my first dog Joey, who came to me after a car boot sale in Mouhous, where I was supposed to be getting rid of stuff and definitely not getting a dog!!! 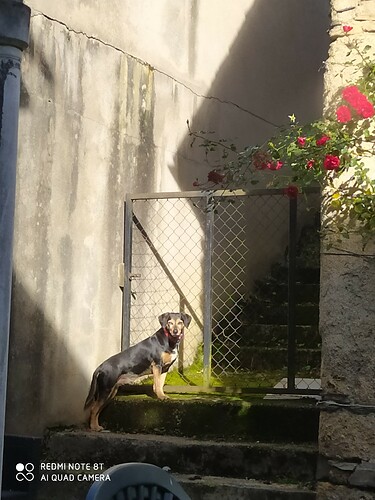 This is our scruffy old dog, Syd. @DeTolkTW there is another thread on here with loads of dog pictures 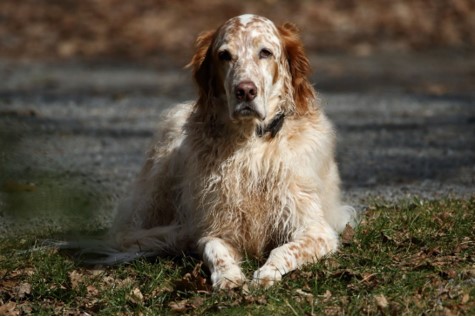 Hi Mark,
I searched but couldn’t find it. But then I often go faster than my brain lol.

@DeTolkTW I don’t know how to do links on here but see if this works:

As promised, a bit late, Lira arriving home with Fran after breaking her leg. Not the first time. [b. Homecoming - Fran & Lira with broken leg strapped.] And Lira with Lurch, a real gentle soul. He is the one on the right and, because in his previous home the children had crayoned on him, we spent quite some time trying to wash the black lines from the corners of his eyes. Then we realised that that was part of his 10% Saluki heritage.

it’s for dogs only and I notice that the last but one entry is of my 2 lovely Greyhounds, Lira and Lurch (90% Greyhound/10%Saluki Lurcher)

Your first dog Joey looks very much like a Beauceron to me, another of my favourite breeds.

And @Mark love your Lemon Setter, just like my late Tosca who I have just mentioned in a reply to Deedee in my Rural Land thread.

My first Froggy doggy was from SPA in Montluçon. I renamed him Luçon… because he was Mon Luçon.

Our late, lamented Issa the Maltese, a bimbo, but also very cunning, much loved and greatly missed. Below in arms of OH (one striking her other worldy, intellectual pose whilst the other simply concentrates on the camera). But both lookgreat! 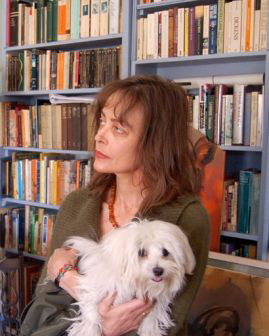 But now we have Gigi, a miniature poodle - une trop, trop mignonne caniche grise (who was only one of three available in France last summer) and whose family tree of champions runs to four pages of A4 . Can’t post a photo here because I can’t afford her photo rights! She makes everyone else in the household feel a tad plebby. Nevertheless, we also have two superbly aristocratic looking cats who were actually found as kittens dumped by the village cemetry.

I hope this combination doesn’t start a revolution - there are precedents!

Hi Mark,
That was a lovely read thank you. Vive la révolution

A very rare photo of my 3 cats together. It rarely happens, or at least not when I’m around!!
Spud, ou patate,is the black boy. He sits behind a metal railing on a wall next to the house awaiting someone who might stroke him. He’s very clever because he stays behind it, except when it’s my neighbours who love him, and then he comes to the other side to maximise the petting opportunity.
Poppy the black and white cat has a lifelong parasite and bacterial infection that requires nail covers to stop her from scratching. Consequently everyone thinks I paint her back claws pink! 🤦
Finally Mystique the Siamese 57 mix with cross eyes who catches birds in mid flight… I have just realised that each cat that is similar to each dog that I have.
As someone once said quite kindly, ‘well you couldn’t just have normal animals now could you?’ 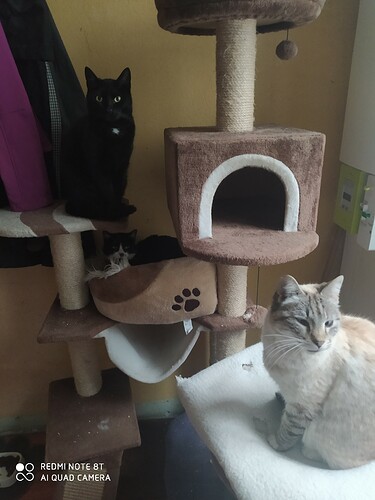 Ourblack cat, Nigra could be a body double for your Spud.

The origin of his name is ‘nigredo’ the base substance mediaeval alchemists tried to create by burning things to their blackest most basic state. Our cat is very black!

Blimey! I see what you mean about the alchemists. I love black cats. Spud is the only one who came to me as a kitten. I kept him because the SPA is full of black cats no one wants.

SPA is full of black cats no one wants.

That surprises me - why do people not want black cats? They are sooo smart-looking…

According to Carmela who runs the place, it’s all to do with superstition and witches. I think in my village, strays apart, there are maybe 3 black cats, one of whom is Spud.

That’s interesting, Damaris. If we get to the point of wanting a catof our own, I shall bear it in mind! At the moment, our neighbour has lots of them and they all “use” our garden. A few years back they had 32 but I think the husband put his foot down

We have probably 32 strays in the village. I’m trying to convince the Mayor to use the ‘chats libre’ program but it’s a long task. 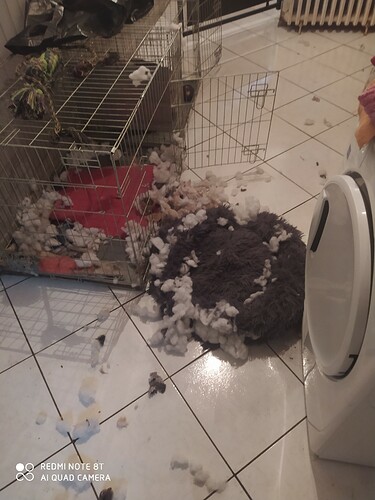 It’s raining really hard, so no walk tonight and no agility for Gaïa…she got her revenge 🤦🤦🤦

he is the brown one 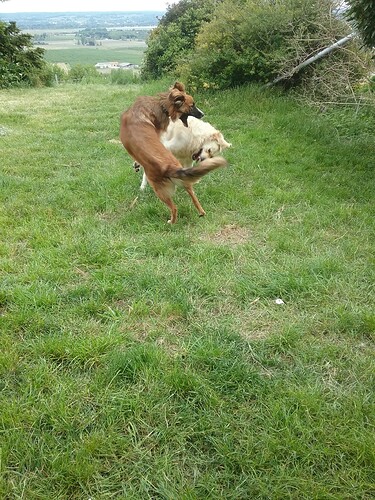 No time for a picture, but we had a surprise visitor at 1.30 this morning. We were all settled in bed when Jules, our Dobie/Beaucie X foster started barking and howling. This means only one thing, he detects somebody or some animal outside. At the same time the motion operated light came on on the front veranda, outside my bedroom window. It does happen from time to time but normally means a cat which is soon scared off by the howling, but this time it happened several times so I looked out of the window and saw a small Border Collie looking back at me.

So I went outside with Jules and he must have thought at first that it was a cat and rushed at the dog. No harm done, apart from a small fresh red sore on his ear, soon treated by me with a drop of Bettadine, I gestured to the Collie who immediately came to me, with Jules in tow. I encouraged him into the house and we found him to be very friendly and was sporting a collar with his name, Eddy, and a mobile number printed on it. So I phoned, left a message then a text and we decided to settle him in Jules’ daybed, he normally spends the night on the dog settee in the living room in sight of me through the open door. This is inside a large cage and after we had calmed the two of them down, they had been playing very boisterously, I encouraged him into this cage and, unusually, shut the door. He cried a bit but once all the lights were out and silence reigned, he spent a calm night without a sound.

This morning his owner called and came to collect him. She was on her way to work and I was getting ready for my weekly shop, on which I would otherwise have taken him, along with Jules, so not much time to talk.

To be honest I was sad to see him go, and I am sure Jules enjoyed the rediscovery of play, lost since Harper Grace our last foster was rehomed. Maybe next time.

To my great joy, the lad has taken to leaning against me when we have our siesta. 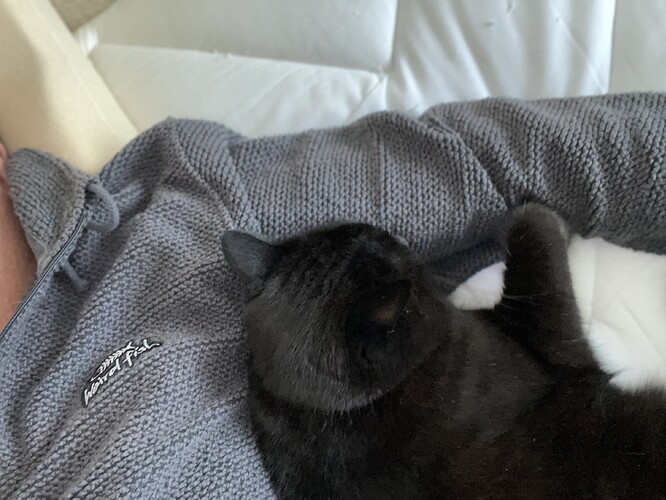 Our 4 kittens are loosing the kittenish traits of going everywhere and doing everything at 200mph, they are now turning into couch potatoes like their 5 adult relations 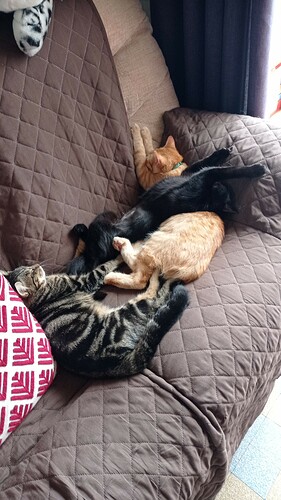 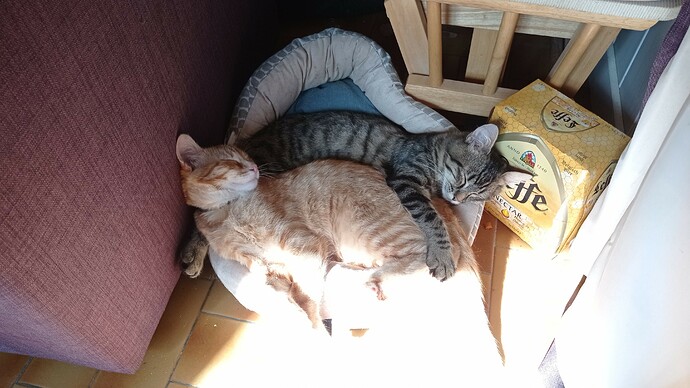 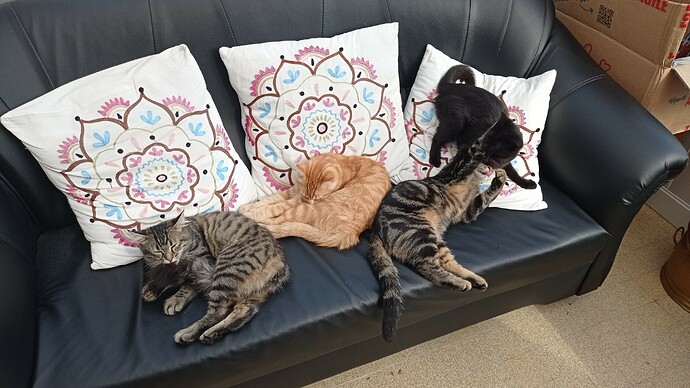 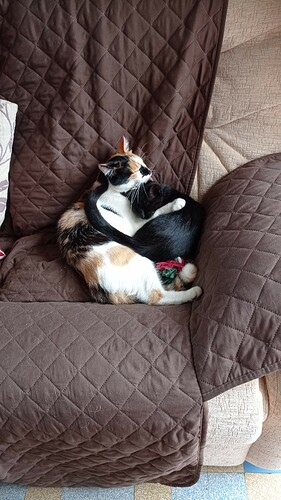 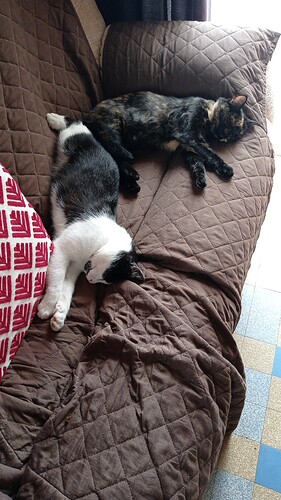