Hi all,
can anyone recommend a reliable and cost efficient VPN for mainly catch up U.K t.v?
Thanks in advance.

There are a few topic on this already… look at:

Anyone recommend an IPTV provider that’s not going to go out of business within a couple of months? I’ve used about four in the last two years and can’t seem to find a new one that will reply to my questions. Please tell me someone has a one they use reliably!

WIFI is part of the TV. Is it best to have the WIFI line plugged directly into the TV. Using the provider Orange are UK programmes available? And Netflix, Youtube etc?

Since I moved here two years ago I’ve successfully accesed iPlayer via VPN Express. There have been odd days when it’s realised that I’m not in the UK, but this has been very speedily remedied by the VPN Epress helpdesk. However, for the last two months the iPlayer app has amlost continually blocked access via this particular service. The realise the problem and are working on it, but don’t seem to be getting very far. In every other respect Express VPN are excellent. Can anyone recommend a provider who don’t have this problem with iPlayer that I can use until it’s sorted out, if it ever is?

I have a VPN in order to watch iPlayer on my computer. But my computer is very slow … and my TV a bit old. So I am thinking - new computer and /or TV. Question : can I buy a UK TV in the UK which has iPlayer installed and somehow connect it via ethernet to my VPN ? - missing out the middleman - the computer ! (for clarity, I must add that for health reasons, I do not use wi-fi in my home - hence the comment ‘connect it via ethernet’) thanks in advance geoff

If you know someone who is tech savy in the UK, they could set up a raspberry pi running pivpn for you. After the capital costs of the raspberry pi (£50) it is free, and will never get blocked since it will operate from a residential address. You will also need a dynamic DNS watcher (www.no-ip.com which is free) to follow the ip address issued by the ISP which generally gets changed whenever the router is rebooted.

I use Surfshark and have found them to be very reliable. They have three UK servers and if one becomes unavailable switching to another usually works. Good customer service too. The only problem is that Amazon UK is currently unavailable on most browsers but they’re working on it.

Surprisingly too, my very small travel router has a more powerful wifi signal than my Orange Livebox

. The only problem is that Amazon UK is currently unavailable on most browsers but they’re working on it.

I can vouch for using a GL-iNet travel router to do what you want. I used one all last month while in France. I hot-spotted a phone using an Orange Holiday card, connected the GL-iNet 750 to the phone (or the B&B wifi), and then all my laptops and such connected to the 750. The 750 connected to whichever VPN I was using that day. I use several VPN services and also have one set up on my firewall at home.
GL-Net has step by step walkthroughs of setting up many of the popular VPN services.
As someone already posted, using a RPi at a friends house would guarantee you wont get booted off the iBBC.
Another option would be a Smart DNS service. I use it to watch iBBC from the States occasionally. They have walkthroughs for many smart TVs.

Travel router sounds good but appears to require a broadband to work?

I am purely mobile. This topic does need updating from time to time, as which VPN works is constantly changing depending on the efforts of the BBC and Amazon, for example, to defeat VPN’s.

From comments referred to, I take it ExpressVPN no longer works with iplayer? I can contribute that NordVPN has been on a path of letting me down for 17 months now, and has now completely stopped working. Apparently they’ve got bugs with W10 with complicated workrounds that they are claiming are acceptable for someone to operate that thought they’d purchased 3 years of a working-out-of-the-box solution.

Someone recommended PureVPN - any feedback on how that works ? I need mostly to conceal location for general sites that are sensitive to this. protection on banking applications, and occasionally iPlayer but need it to work, very keen that Amazon should work but I’ll settle for iPlayer working when needed.

Any others? only 3 servers with Surfshark sounds like too easy for BBC to eventually just block them down as there’s not many of them - which would leave a subscription useless, as I’ve found paying NordVPN was.

Any suggestions for someone wanting to use mobile signal as a base working currently would be appreciated (not broadband).

Like others here I too can vouch for using a GL-iNet travel router, pre-pandemic I traveled to many countries with work and found the GL.iNet 750 to be a great piece of kit.
Sureshark was the last VPN I found to be reliable.

Thanks every one you have all been very helpful and i am now sorted.

Hi KarenLot, You can tether your mobile to the travel router. This is the instruction in the manual. 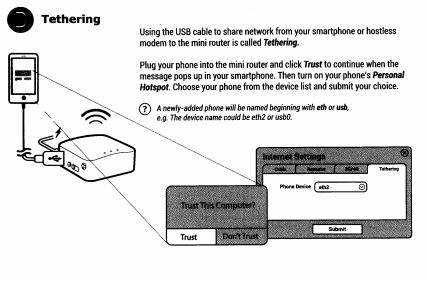 Thanks PeterE. My phones will all act as hotspots - I’m just puzzling what does the router add?

Thank you [Colin?]. Looking hard at PureVPN with Surfshark as a backup now.

Good to know from other kind replies that ExpressVPN may have got a bit ahead of iPlayer again… I liked dealing with them previously so I will put them as No.3 to keep aware of.

Thanks to all for your replies

Thanks PeterE. My phones will all act as hotspots - I’m just puzzling what does the router add?

If you have a laptop, smart TV or streaming stick you don’t have to install a VPN on each device. Instead, the VPN is installed on the router and any device connected to the router gets its data via the VPN.

Interesting, thanks. I have UKExpat VPN and it’s fine on the Mac but haven’t used it with the French TV because a) my French is poor and b) I’m waiting until I move to buy a proper up to date Smart TV. The Expat VPN claims they work with Smart TVs and Amazon Firesticks so we shall see. Perhaps your suggestion is better. I’m going south and will no longer have a UK dish

I personally wouldn’t buy a smart TV. I would buy a normal TV and a separate streaming box/stick. The reason is the Smart TVs eventually lose their smartness. Take Channel 4, All4. Their app was removed from a lot of Smart TVs since the Smart TVs do not update all the apps. Thus that channel is lost, whilst a ROKU streaming stick, or Amazon Fire have a vested interest in maintain the apps available on their devices. A streaming stick costs 20-30GPB/euro, and the functionality built into a smart TV costs considerably more and prone to becoming outdated.
Without a doubt, if you can maintain a Raspberry Pi in UK running a VPN service, that is the better option.

I got the impression corrie has a TV and was thinking of upgrading to a smart TV to solve his problems.