What's going on with AstraZeneca?

have you noticed an increase in your spending habits then @John_Scully

He’s searching for an answer!

Only for Lidl power tools I’ll never use. Got a nice electric paint sprayer yesterday for 29 quid. Missed out on the 40 quid Kango hammer though. Hope I never have to through a wall in an emergency.

It’s so tempting isn’t it? I saw a really nice cheap roofing ladder on Le Bon Coin the other day - but really, am I ever going to climb on a roof again at my age?

What sort of feeble justification is that for not buying another tool!

When am I ever going to use my Lidl submergible pump, or my Lidl portable compressor?

Does 12% mean that they have a controlling interest?
I don’t think so.

really, am I ever going to climb on a roof again at my age?

That’s not the question. It is am I prepared to cause untold stress and anxiety to my family/partner/ pet goldfish by climbing on a roof again? OH fell off a ladder last year and is now totally banned!

OH fell off a ladder last year and is now totally banned!

don’t want to be trapped in perpetual restrictions/ lockdowns and I will quite happily take my chances with the miniscule chance of anything bad happening to me to get me out of this covid mess and get as normall a life back as possible.

Our thoughts entirely, that’s why my wife and I badgered our excellent Doctor who said “as soon as I get supplies I’ll call you” which he did and we had ours about a month ago.

A lady we know in our commune has developed symptoms the day after being vaccinated with the Moderna vaccine.
She was at her computer and tried to pick up a pen to write something and couldn’t.
It seems that there is a clot in her carotid artery.
She was initially taken to Macon but has since been transferred to a specialist neurological unit in Chalon and she will be operated on to remove the clot.
There are reports coming out from the USA of clots being caused by the Johnson and Johnson vaccine as well.

It seems that there is a clot in her carotid artery.

I had that and it caused a stroke - and this was well before Covid. I hope the dear lady recovers well.

Our MG has several doses of AZ available daily, but I got the impression when I saw him the other day that people weren’t exactly beating a path to his door.

She called the pompiers straight away, so she stands a good chance.

Mine was found to be completely blocked on the right hand side (and AFAIK still is) so that affected the left hand side of my body, principally strength in my left arm and an unawareness of things going on to the side of me. We can be sat nest to each other at the table, Vanessa can get up and move elsewhere and I still think she is there as I start talking to her. Most frustrating. I had a couple of sessions in the IRM scanner which were terrifying (I’d never been knowingly claustrophobic before) to identify the issue and it has affected other things too health wise. I spent a number of days in ICU and had some strict talking to about future life habits by the chef de service. Hence now, no alcohol and a very strictly control diet.
The IRM scan found that I had already had one stroke of which I was totally unaware and I now realise just how devastating a left side stroke affects someone. I’m just grateful for small mercies that mine was right sided so I’m able to cope without feeling “trapped” if you understand my meaning.
But what you described with the lady in your commune at her computer trying to pick up a pen just rang true. In my case, what I was trying to say at the time to Vanessa turned out to be basically gibberish so something was clearly wrong.

I do hope you continue to maker progress. It must have been a terrifying experience.

To digress slightly, I would heartily recommend anyone who hasn’t done this signs up for some first aider training. The basic one is 90 minutes of your life, and you could save someone else’s. 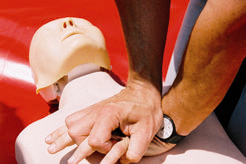 They are not holding sessions right now, but have a list for when they do.