Making a table from discarded pallets 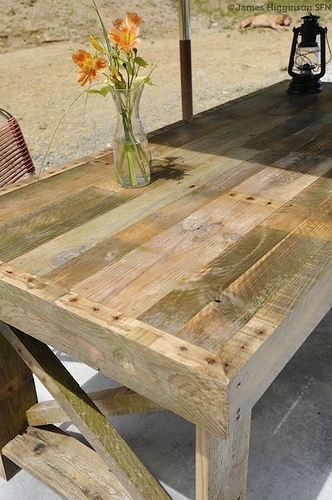 I have a number of quite decent pallets that have been stored outside since 2008, they are sturdy, the ones used to deliver concrete blocks rather than the lightweight type.

They’ve taken on a nice patina of age and yesterday I used a few of them to make a table.

You should be able to pick up pallets at your local tip or ‘decheterie’. If you decide to have a go, please post your projects on SFN as a blog post, or just here in the comments below!

Here’s how I did it;

The raw materials, I actually used three in the end. 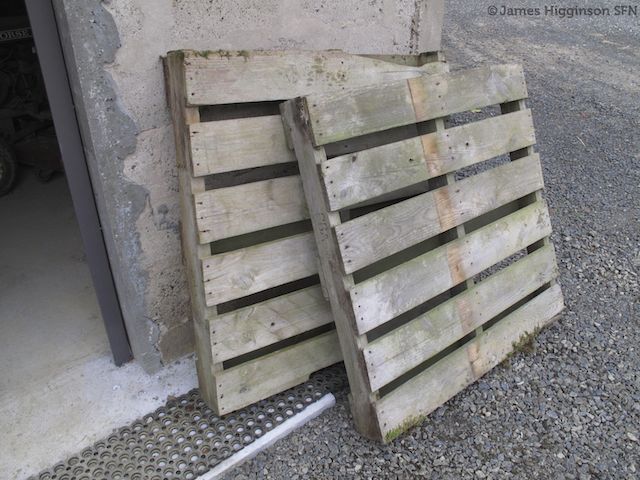 First I cut the pallets using a table saw, this isn't strictly necessary, you can disassemble them with a hammer and bolster. 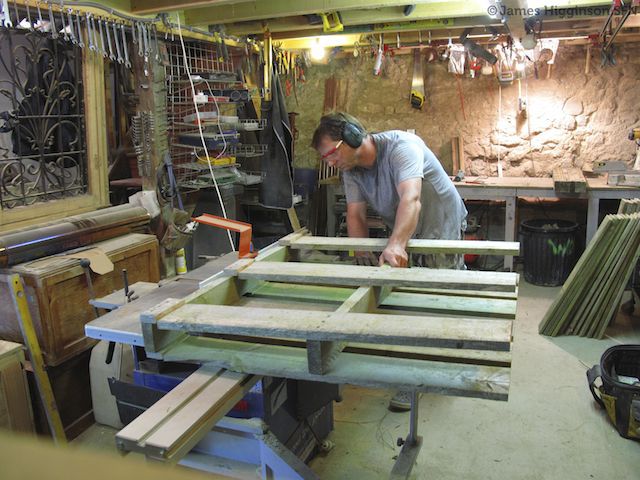 Then I tried removing the nails with a claw hammer, this was useless as most of the rusty heads stripped off and I was left with just the body of the nail still intact. 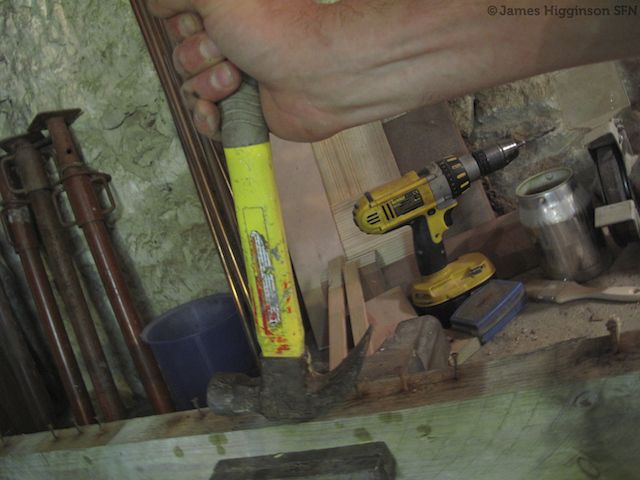 It was much easier and faster to cut them off with an angle grinder. There are loads of them! 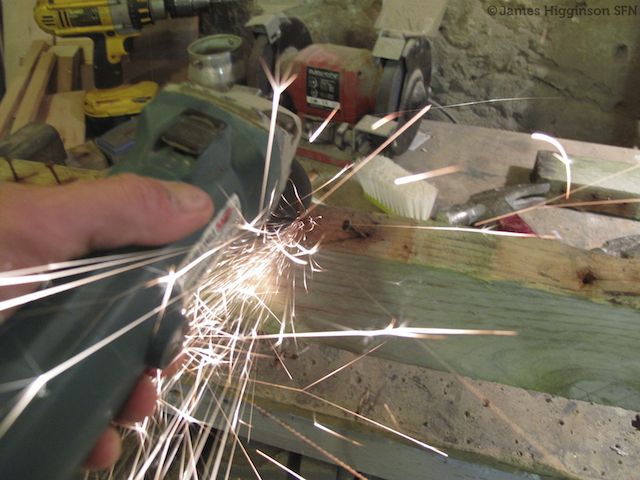 I ran everything through the table saw to trim the edges so that all the boards were exactly the same width, again this step could be skipped if you don't have a table saw. This is the timber I was left with from two pallets, I had to do a third in the end as I was making it up as I went along. I had no initial design, I wanted to have a look at what I had to work with before making and style decisions. 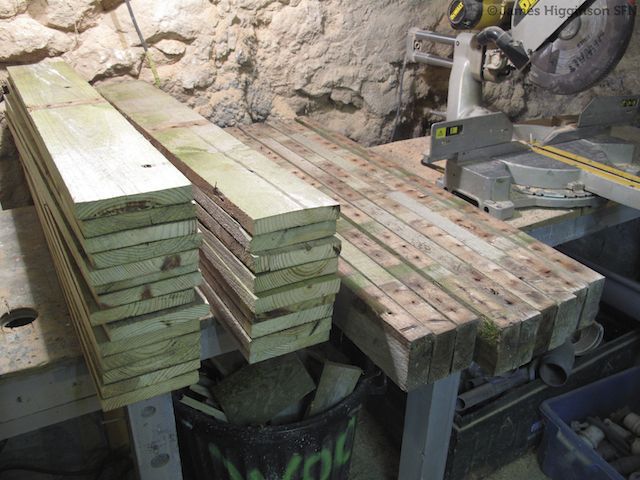 I made a rough sketch primarily so I had some dimensions to work with that would suit the size of the timber I had available and assembled the frame. 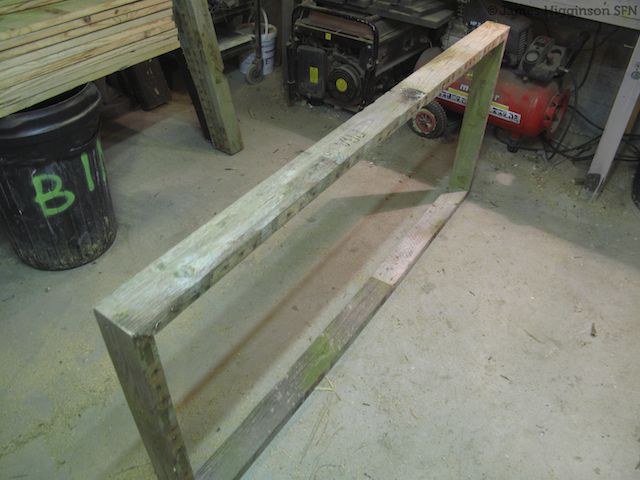 Still not decided on how the legs would look, I screwed some on anyway to make working on the table top easier. I've added an inner frame 20mm lower which will hold the boards in place for the top. I was initially intending to place the boards across the table, that would have been easier as they would all have been the same length. I decided they would look better long ways though, so I added a couple of supports. 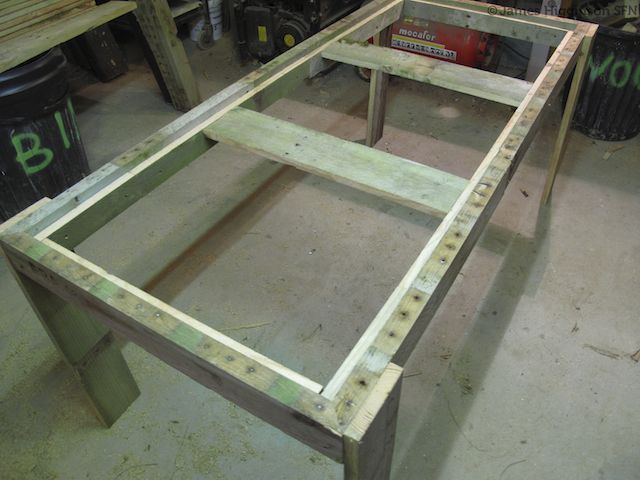 Then I began gluing and nailing the boards to the inner frame and lateral supports, some screwed from beneath too. 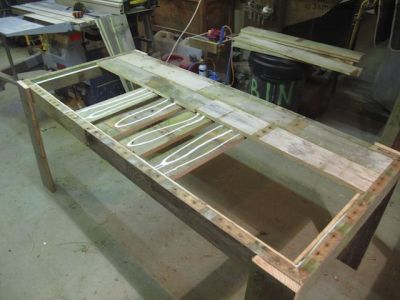 I cut the center ones thinner, so I wasn't left with really narrow strip on one side. 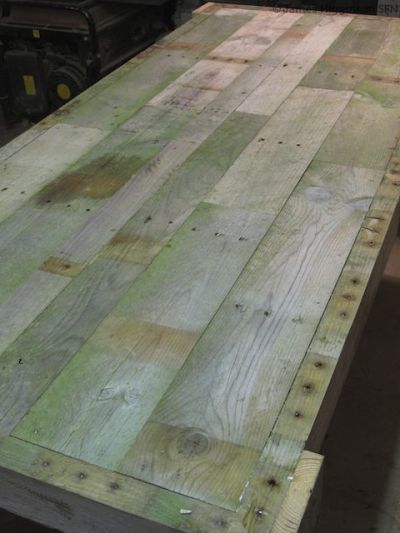 I moved the legs to the inside of the frame and added to braces, they do offer some strength to the table but they are mainly cosmetic. Kept the moss that was growing on one of the boards too! 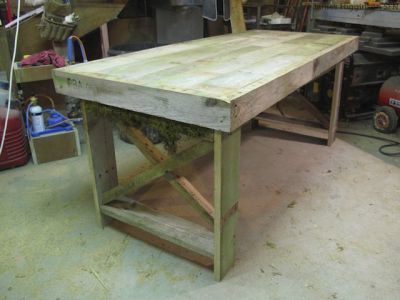 I gave the top a quick sand with 120 grit paper, not too much though as I wanted to retain the patina and gave the whole thing two coats of V33 Aquastop. Done! 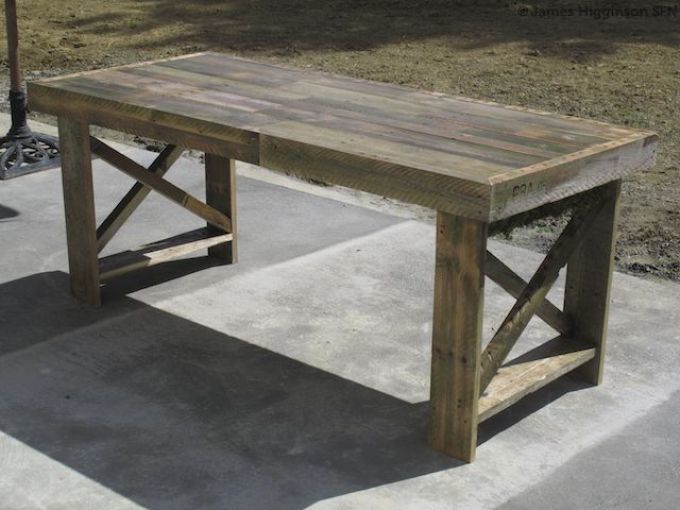 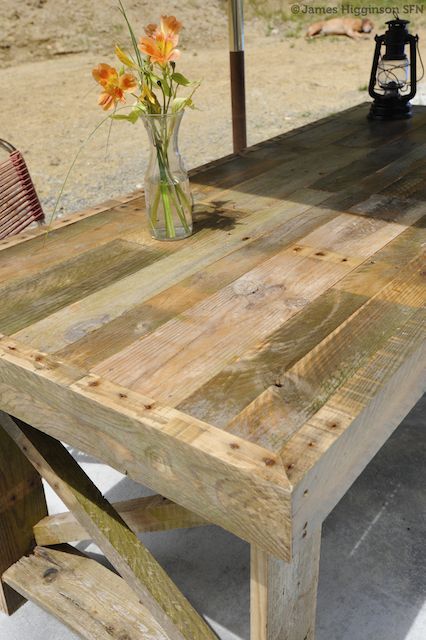 Get your varnish here

Handful of screws and nails, about a fiver!

[image] [image] The first step in any pallet project is disassembly. On previous projects this was tricky and time consuming until I found this pallet pry bar which makes the process much easier. [image] Removal of the nails is the next step; if the heads shear off or they are too stubborn to remove, just bang them in. [image] After three hours I have all seven of my pallets disassembled and as nail free as possible. [image] Most pallets you find are only around a meter long, in this case I needed longer sections so I've mitred and glued and screwed some of the stringers together. The stringers are the joist part of the pallets; not all pallets have them. Some just have the boards and useless chipboard blocks, so keep an eye out for the stringer type, they are much more versatile. [image] The mitred joins will be much stronger than trying to butt them together. [image] In this case I've used two screws in either side and plenty of PVA wood glue. …

Demolition bars are available on Amazon too

I got the pallet splitter from Tony Cox at Screwpak, he's a member, give him a shout, I'm sure he can get you one.

Oh, the measurement was right, but it turns out inside is different to outside! And I would keep cutting the mitre in the wrong direction... I need an actual plan, with numbers and measurements marked on it, and to do three at once, since once I got in the groove I was working really fast and accurately. Wouldn't have taken me more than half the time again to make three! The sanding would have been the same, though...

Now, where did you get your pallet splitter??

I'm not sure it would have worked on these, since they were much lighter than the ones you used, but that meant that the nails were lighter too, so I could separate them with a mallet onto a block of wood, if you understand me. But I am busy trying to source a reliable supply of pallets. I've got a mate at Point P, so in time that should give me enough...

Well, that didn't take me that long, considering. Made and recovered from my mistakes (one of which can be seen if you look closely) and shan't make them again. Now thinking of making more - apparently stuff made from pallets is really London chic at the moment and all my friends on fb are raving. This is just a top for an existing (horrible) metal table, but will do the legs differently, I think, for the next ones so that you can easily push your legs under the table. G/f thinks we can get 12 people round this one...![](upload://haKQqDtffL7vyc5KriuGVbi9Zd0.jpg)

I'll be getting some!

I forgot to say, they ship to France at what I thought was a very good price!

Lovely Simon, thanks for the link!

for my projects I've used these https://wickedhairpins.com/shop/ taking it to another level...

Time to get working on some chairs LoL

Finally got around to making one! Thanks for the guide, it was very useful. Here's mine: 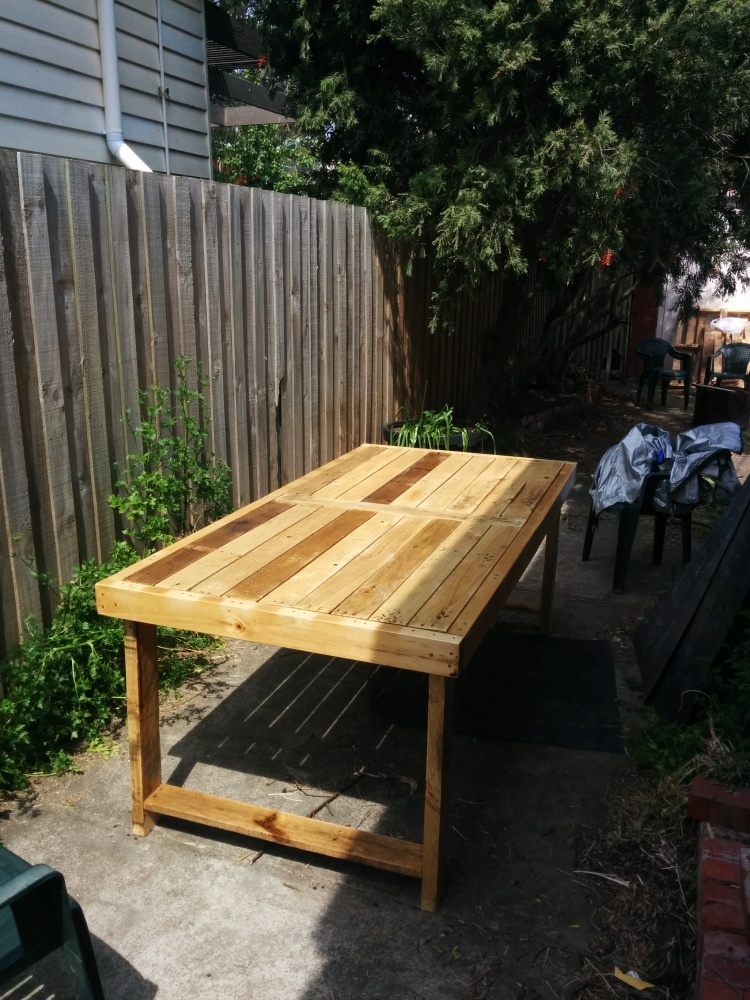 On the inside of the frame there is another board which spans that joint Nicholas, that's what makes it super strong, although the glue and the screws would probably do fine without it. 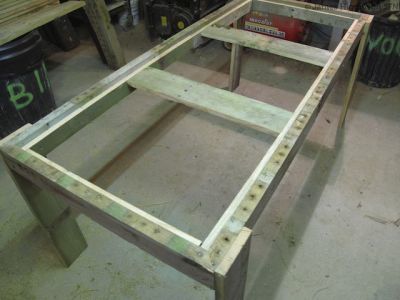 Great table it, it looks amazing! Just a quick question: It looks like you've used two pieces for the length of the table, how did you join these together? and how do you ensure that it doesn't sag in the middle where the joins are?

Love it.....Indestructibles is also a great site for ideas, love the table tho...

...if you look at Pinterest there's a lots of DIY stuff including how to make things out of pallets and lots more... you'll get some amazing ideas and often they come with full instructions... :)